Mpox (formerly know as Monkeypox)  is a rare disease that is caused by infection with Mpox virus. The mpox virus belongs to the Orthopoxvirus genus which also includes variola virus (which causes smallpox), vaccinia virus (used in the smallpox vaccine), and cowpox virus.

Mpox was first discovered in 1958 when two outbreaks of a pox-like disease occurred in colonies of monkeys kept for research, hence the name ‘monkeypox.’ The first human case of mpox was recorded in 1970 in the Democratic Republic of the Congo (DRC). Mpox is thought to originate in rodents in Central and West Africa, and it has repeatedly jumped to humans. Cases outside Africa are rare and have so far been traced to infected travelers or imported animals.

In May 2022, multiple cases of mpox were identified in several non-endemic countries. On July 23, the World Health Organization (WHO) Director General issued a statement declaring that the global mpox outbreak represents a public health emergency of international concern (PHEIC). Following this, the Public Health Agency of Canada (PHAC) also issued a statement to provide an update on the ongoing response to mpox.

By November 21, 2022 the number of mpox cases had climbed to over 80,488 cases worldwide, with 103 locations being non-endemic countries. Epidemiological investigations are ongoing. The vast majority of reported cases so far have no established travel links to an endemic area and have presented through primary care or sexual health services. Studies are currently underway to further understand the epidemiology, sources of infection, and transmission patterns.

The Public Health Agency of Canada is working with provincial and territorial public health partners to investigate cases of mpox. As of November 18, 2022, there have been 1,449 cases of mpox in Canada. 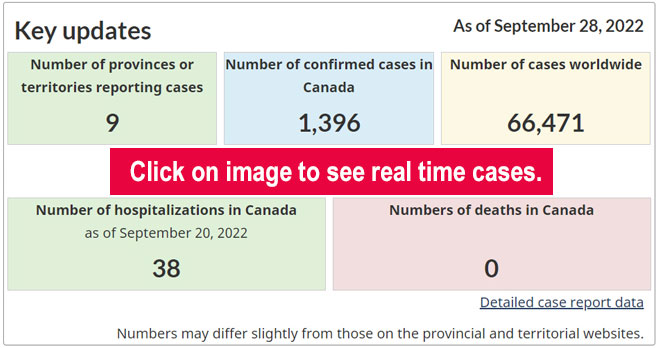 Historically, there has been limited person-to-person transmission.Monkeypox can spread from animals to humans, from person to person and through contaminated objects.

According to the World Health Organization, all of the infected people in the U.K. contracted the West African clade of the virus, a version that tends to be mild and usually resolves without treatment. Most people experience symptoms that last 2 to 4 weeks and occur in two stages. The infection begins with fever, headache, aching limbs and fatigue. Other less common symptoms can include sore throat, cough, nausea or vomiting, and diarrhea. Typically, after one to three days, a rash develops, along with blisters and pustules that resemble those caused by smallpox, which eventually crust over.

The second stage usually starts 1 to 5 days after the first stage. Rash (sores/blisters) develop. Mpox sores/blisters are most commonly seen on the hands, feet, arms, legs, mouth and/or genitals. Mypox sores/blisters usually last between 2 to 3 weeks. The rash change in appearance over time from raised spots to small blisters filled with fluid. They eventually form a scab and fall off.

A person of any age who presents with one or more of the following:

Has one or more of the following:

A person who is laboratory confirmed for mpox virus by detection of unique sequences of viral DNA either by real-time polymerase chain reaction (PCR) and/or sequencing.

PPE used by healthcare personnel who enter the patient’s room should include: